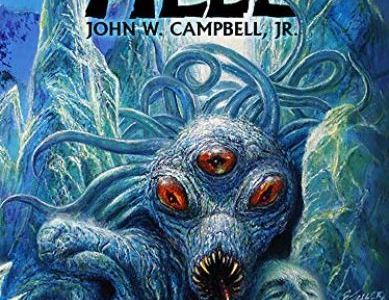 Here we go … again. Another remake upon a remake. It’s horror, so another familiar face, Blumhouse, is involved.

Sacrilege! That was my first reaction to the news of trying to soft reboot and retell …

John Carpenter’s horror masterpiece, which is based on The Thing from Another World (1951), the black and white adaptation that has its own 50s eerieness … both are adaptations from a novella by John W. Campbell Jr.

Most recently they tried with a prequel to The Thing 2011 and that version flopped (I haven’t seen it yet). I’m not a fan of prequels in general. We know what’s happening, so it takes a lot of wind from the sails of the story. Alas, this is what they do in Hollywood, they would rather try to cash in on known properties versus taking chances on adapting or telling new stories.

Then I learned there was literally more to the original story. A recently unearthed novel-length version of the classic novella Who Goes There? by John Campea, Jr. called Frozen Hell. Hmm.

Back in 2018, John Betancourt announced the discovery of a novel-length version of the classic novella, and he took to Kickstarter to fund the release of the novel, titled Frozen Hell.

Betancourt is working on a sequel. I was intrigued by who found the original draft by Campbell? Wikipedia had the answer:

In 2018, it was found that Who Goes There? was actually a shortened version of a larger novel previously written by Campbell. The expanded manuscript (including an entirely different opening), titled Frozen Hell, was found in a box of manuscripts sent by Campbell to Harvard University. The discovery was made by author and biographer Alec Nevala-Lee, during his research on a biography of Campbell and other authors

Wikipedia: Who Goes There?

The question is if Campbell himself who became an editor never saw fit to release the expanded version, is it worthwhile? Just because a longer version exists, doesn’t mean the story ever needed to be longer. Maybe the editing to the classic novella was best as is.

This is what new movies based on older properties seem to chase. Usually unwisely, because the vast majority of remakes despite some making money, are pale imitations to earlier, better movies.

This all leaves me with more questions than answers, but there is some curiosity.

Will the new screenplay follow Frozen Hell? The early reports are that this is the plan. It could deviate further, which is my suspicion, thus using Campbell’s original manuscript as a marketing tactic instead of a legitimate need to revisit and use the story.

Take your choice, hot or cold?

One lives in arctic environment (The Thing) and the other lives underground (Tremors) hydra-dirt creature.

Which one would win in creature showdown? I think strength has to go to the Tremors hydra creature. Can you imagine what brute strength it takes to tunnel through the rocky ground. But let’s not forget one of the Tremors creatures dies running full bore into cement, where you would think it would have shattered that to pieces.

I’m taking The Thing to win the fight, although I think it would be a fun boss fight to see. What do you think?